GaiGai: This Date Via An Offline Matchmaking Service In Singapore Did Not Go At All As Planned

There are a ton of apps out there in Singapore that assist those stuck in the lonely hearts club. Not everyone has a similar agenda though, and it can get tedious trying to sieve out those who are there with honest intentions and those looking for a quick “coffee”. 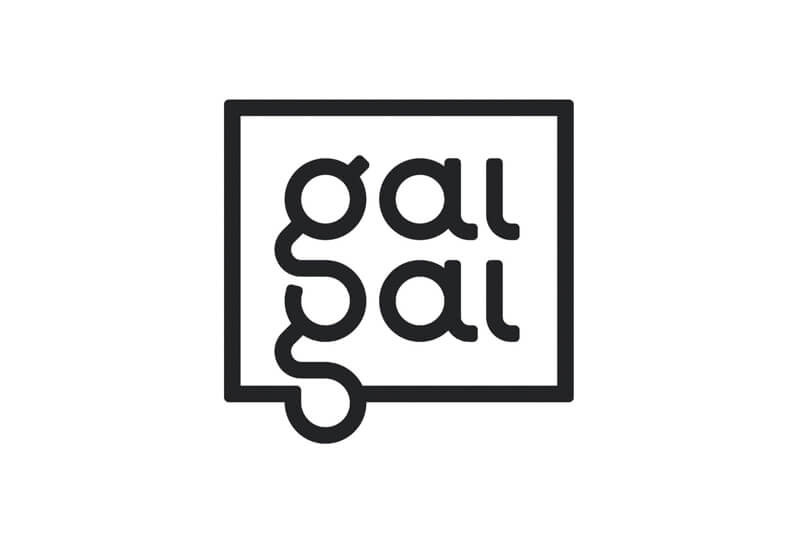 Well, GaiGai is affiliated to their quick-fire, right-swiping sister application, Paktor. And if you’re familiar with Tinder and Paktor, you know it’s pretty much like how insurance companies work; it’s all based upon the law of large numbers.

The more you swipe, the higher your chances of finding yourself a match. I’ve personally seen friends go ape-shit with their device, swiping right with the rate of a SAR-21 whilst still holding a conversation with me. Who says men can’t multi-task.

What I’m getting at is that despite this “technological advancement” in the dating world, there is a legitimate community of people out there who specifically want to avoid such services. So in steps GaiGai, an offline dating service.

It’s a marriage of modern and traditional means. There are actual stats and analytics that go into finding the closest to perfect match for singles. And with such data, comes in-depth fact finding. The first thing I found out was that ethically, I wasn’t able to partake in their service.

Me being attached already was a big NO to them. GaiGai has a strict SDNtrust accreditation, that strictly ensures that all their applicants are single. Although I’m still legally single, I disclosed the information to them and they very kindly told me to find someone single to follow up instead.

There are quite a number of rules that GaiGai implements; Firstly, you’ve got to be of age, and 18 doesn’t cut it. You’ve got to be 21 or older to be a member. Clearly you’ve got to be single, and being separated isn’t enough. You can’t be a criminal, neither can you be a declared bankrupt. 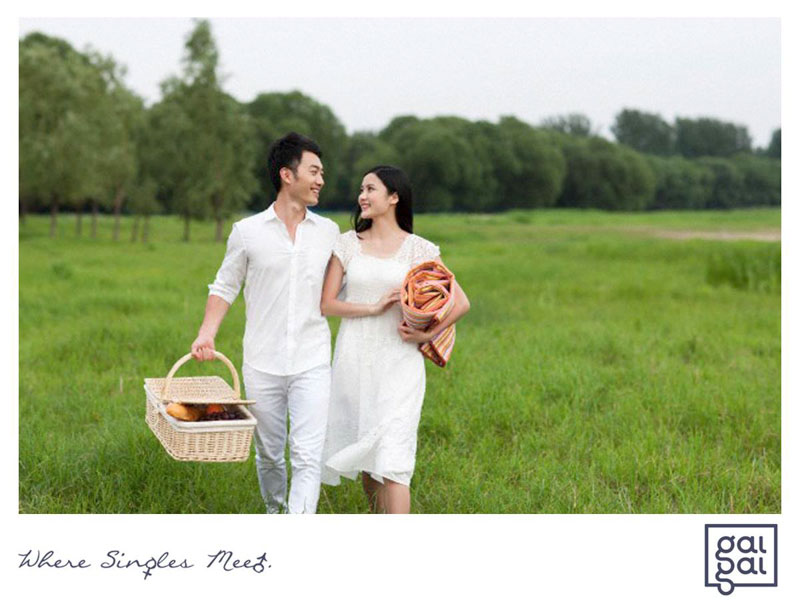 So with me not meeting the criteria to go on a date, I turned to a friend who fit the bill – we’ll call him Freddie. We met at Cecil Street where GaiGai is located for our interview with a relationship manager.

The interview was conducted behind closed doors in a small private white room, a good omen for fresh starts. It began with regular questions such as your address, your primary spoken language, whether you’re an alcoholic and other such questions.

It soon got pretty in-depth. Freddie now had to dig deep and list his preferences in a potential partner, which proved to be a challenge for someone as easy going as he is. The relationship manager covered everything including past relationships and reasons it failed, among other personal questions.

It works like this; there are a couple of packages that one can go for with GaiGai, and of course they range from “free” to “it costs that much to get a date?”. You get different services based on what you’re signing up for, obviously. 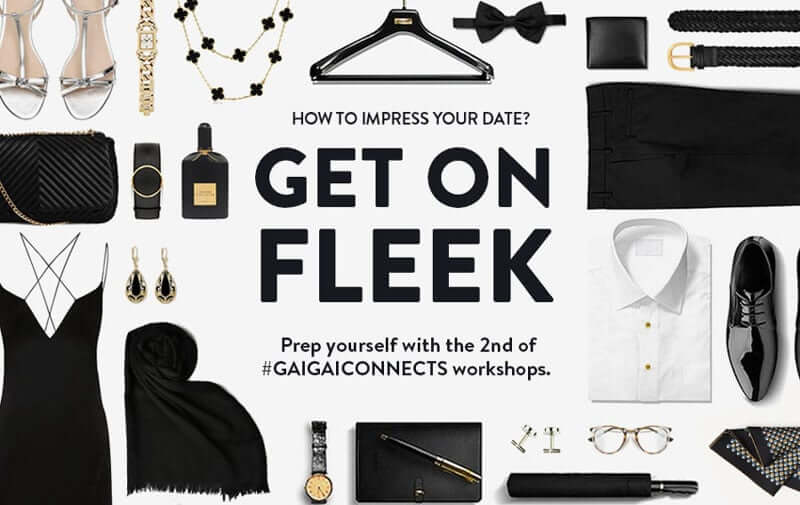 Freddie, in this case, just wanted to get a date, while I was mainly curious about their dating service. GaiGai also offers certain perks to help prepare you for your date. Perks such as ensuring your eyebrows are on fleek or your outfit is on point, and other trendy millennial nuances.

There are also a ton of events for members – you’ll get to attend masquerade balls, durian buffets, pub crawls and more, all whilst you mingle with other singles. So instead of swiping left or right on a face you see over a screen, you get to do so in person.

It usually takes a month or two before your relationship manager gets back to you with a date, because good things don’t come easy. Prior to your actual date, you’ll receive an email that gives you a lowdown on who you’ll be meeting. 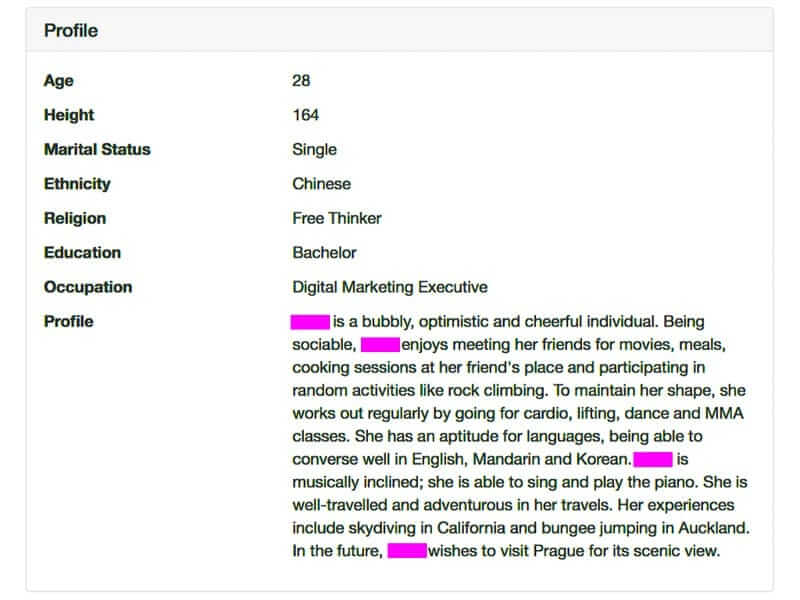 Something a little like the above image. You’ll get a profile with just text, no images. GaiGai will arrange for you and your date to meet in a nice restaurant, with a reservation placed under your names. So the first time you ever meet your date will be in person.

Despite Freddie not caring for looks, he did say he was blown away by how attractive Francine (Not her real name) was. It’s always an added bonus when your date looks good, but what I really wanted to know however, was how smooth the date went.

According to Freddie, there weren’t any awkward silences, and Francine was a great listener despite them not really having much in common. Freddie is a music man, whilst Francine is into MMA and jumping out of planes.

The date stretched on till the restaurant closed, with laughter and conversation going on even after plates were empty. Francine had actually made plans for her evening after dinner, but stayed on. I took that as a good sign that it was a success.

Come the end of the evening, Freddie offered her a ride to her next stop and eventually exchanged numbers. I don’t know if they’re still texting, but their night does seem like a better story to tell their hypothetical kids than “I sent your mom a super like”.

In all, GaiGai might not be your thing, but it did provide two people with tight schedules an opportunity to meet someone they’d otherwise never cross paths with in real life.

In a world where we’re advocates for our careers and our futures, it’s become harder for one to connect with someone on a genuine basis, outside of your own immediate social circle. And if you’re looking to go on a date with certainty of a common end goal, then GaiGai works.

Get the latest updates by following us on Twitter @hypeandstuff & Facebook Have an interesting story to share? Email us at [email protected]
Share. Facebook Twitter Pinterest LinkedIn Tumblr Email
Previous ArticlePAW-sitive: Let Your Pets Roam Free In This Experiential Arts Exhibition At SOTA From 30 Sep – 8 Oct ‘17
Next Article Halloween Horror Nights 7: Get Ready For The Fright Of Your Life At USS From 29 Sept – 29 Oct ’17