Star Wars Day 2018: I Built A Jedi Lightsaber To Commemorate May The Fourth

May the force be with you! Or rather, May the fourth be with you! In case you didn’t know, Star Wars Day is commemorated every 4th of May to celebrate the galaxy far, far away.

This 4 May 2018, I joined in the festivities at Star Wars Day 2018 held at the F1 Pit Building. With throngs of fan activities including costume parades and pewter-smithing workshops, the event will culminate today (5 May 2018) with the iconic Star Wars Run. The event itself was a meeting ground for all Star Wars fans, with both elders and young padawans alike. Never before have I seen so many fans gathered in one place! There were even droids such as the pink R2-KT, a tribute to 501st Legion founder Albin Johnson’s late daughter, Katie.

TGIF! Star Wars Day’s Jedi Academy segment let the kids take a break from exams and train in the Jedi arts instead. Run by international fan organisation, FightSaber, the kids learned lightsaber choreography and battled evil Sith lords. It was quite the spectacle, and the adults had just as much fun as the kids! There was even a jamming session to hype up the night. I got to see Darth Vadar rocking out a guitar solo, how cool is that?

My legs were getting a little sore from all the walking, so I took a break at the open-air cinema. Yes, fans could follow Jyn Erso on her battle against the Empire in the screening of Rogue One: A Star Wars Story, set against the backdrop of the gorgeous Singapore skyline.

As a kid, I would often recreate the epic Anakin and Obi-wan lightsaber fight scene at home with a broomstick. That’s why I simply couldn’t resist joining Fightsaber’s Build-A-Lightsaber workshop to live out my childhood dream of becoming a Jedi.

Truth be told, while I initially laughed at the kids struggling to get the screws in, I was actually the last one to finish my lightsaber. Laugh all you want, but the contraption stumped me while I was installing the LED light. I was so hopeless, I even had to call a Jedi Master to rescue me! Voila! After fiddling for a good 20 minutes, I finally got my lightsaber working. Especially in the night, the lightsaber was really impressive and drew many green eyes from the other fans.

Of course, I had to put this bad boy to the test. Thank God this wasn’t a real lightsaber, otherwise I would’ve left with several lacerations and severed limbs. Guess the force isn’t strong in me!

FightSaber really showed me how amateur I was when they put on an electrifying lightsaber wielding performance. That’s right, lightsaber duelling is a legit thing, and it’s actually pretty bad*ss!

Turns out this Lucasfilm-recognised organisation is more than just a fan cult. They’ve put on professional lightsaber performances at public events such as the Singapore Toy, Game & Comic Convention and more. Think you got what it takes? Then it’s time to check out FightSaber and hone yourself in Jedi combat!

Price: This one-off Build-A-Lightsaber Workshop was S$50 per pax

Star Wars Day was really quite the experience. As an avid follower of the Star Wars franchise, I really enjoyed seeing the movies come to life. With so many people decked in elaborate costumes, even the little ones, I don’t think any fandom’s as dedicated as Star Wars fans. 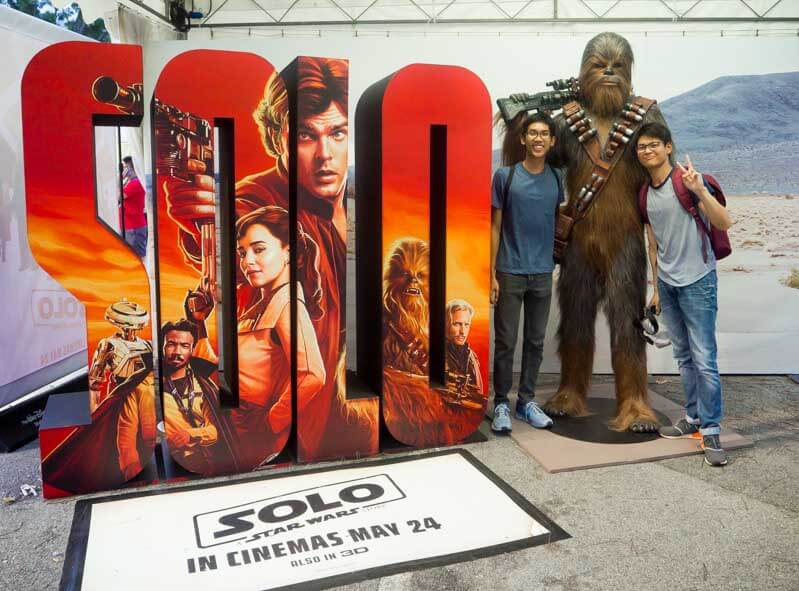 What can Star Wars fans look forward to next? The next instalment in the Star Wars Saga, Solo, is about to hit cinemas this 24 May 2018! Quick, book your tickets to see everyone’s favourite intergalactic scoundrel, the infamous Han Solo, in action.

And if you have the time, it’s not too late to head down to the F1 Pit Building today (5 May 2018) and enjoy the festivities at Star Wars Day. May the force be with you!

Get the latest updates by following us on Twitter @hypeandstuff & Facebook Have an interesting story to share? Email us at [email protected]
Share. Facebook Twitter Pinterest LinkedIn Tumblr Email
Previous ArticleDelve Into The Realm Of Foreign Films At National Gallery Singapore From 10 – 20 May
Next Article Stay Up To Date With The Latest Kicks At This Sneaker Show In Kent Ridge On 19 May