No trip to Japan would be complete without a stroll along her multitude of historical shrines. Some are located in inconspicuous narrow alleys, while others can be found by the charming riverside or up in the mountains.

A country that takes its traditions seriously, the Japanese are known for their eye for detail. Their shrines are a must-visit and boast immaculate architecture — or ‘Japanese precision’. It’s just a little hard trying to squeeze them all into a short itinerary.

Hit up and explore these seven shrines located around some of Kyoto’s most popular tourist attractions in just two days.

Known for having the top Zen Garden in the district, Tenryu-ji (天龍寺) is currently registered as one of the world’s heritage sites.  Constructed in the 14th century, Tenryu-ji boasts an amazing and gorgeous Zen garden.

A huge pond sits beside the main hall, where visitors can take respite before heading out to explore. The grandiose of the reflection of the surrounding trees and rugged rocks on the pond is further elevated by the steep Arashiyama mountains situated in the background.

The clever use of shakkei (Japanese for “borrowed scenery”) makes the whole experience very unique.

The garden has a way of putting one at peace and it was deliberately constructed to appease and placate the spirit of the then-departed emperor.

And with the passing of each season, one would be able to take in the different sights: pink cherry blossoms in Spring, reddish maple leaves in Fall, and snow-cloaked fields in Winter. Residing inside the popular Arashiyama Bamboo Groove, the Nonomiya-jinja shrine (野宮神社) was built as a sacred home for the Ise Shrine Priestess to prepare for the sacred purification ritual.

The entrance of the shrine is marked by a Black Torii Gate and brushwood fences, which appeared in one of Japan’s famous literature works, The Tale of Genji, in the Heian Period.

Today, the shrine is open to the public and is more commonly known as a shrine of marriage amongst women, who flock here and pray to the Nonomiya Daikokuten (a.k.a the God of Marriage).

The other deities enshrined here include Amaterasu (the Goddess of the Sun), Atago (Protector of Fire and Victory), Shirafuku (Protector of Childbirth and Business) to list a few. Before you hike up the seemingly excruciating 5km hiking trail, where the dense rows of vermillion torii gates (also known as the Senbon Torii) are located, pay respect at the Fushimi Inari-taisha (伏見稲荷大社).

A Shinto shrine that enshrines the Inari, also known as the God of Rice, Sake, Agriculture, Tea and Foxes, the Fushimi Inari-taisha sits at the base of the sacred Mount Inari. 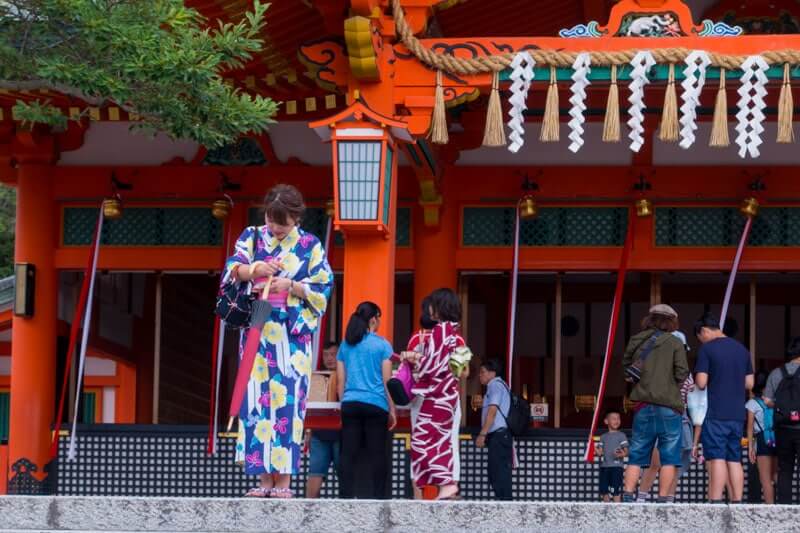 Throughout the year, the shrine celebrates a variety of festivals, such as the popular Seinen-sai (a coming of age ceremony for those who reach the age of 20 in the coming new year).

There are shophouses located right at the base of the shrine, where you can rent kimonos and yukatas or simply purchase souvenirs to take home.

Naturally, the street leading up the shrine will be crowded in the afternoon and we recommend heading down slightly earlier to avoid the crowd. You should also bring along a portable fan as the hike up the trail can be humid, especially during the Summer.

Also known as the Golden Pavillion, Kinkakuji (金閣寺) was once a retirement villa of Shogun Ashikaga Yoshimitsu. As part of his death will, the villa was turned into the Zen Temple in 1408.

Today, the famous Zen temple is one of Kyoto’s most popular tourist sites where tourists flock to in northern Kyoto to take in the majestic view of the temple from across a giant pond.

It’s a sight that’s hard to miss, especially since the top two storeys of the temple are covered completely in golden leaves.

Throughout the course of history, the temple has been burned down numerous times: once during the Onin War (1467 to 1477) and once again in 1950 by a crazed monk. The pavilion that sits on the edge of the pond today was rebuilt in 1955.

To avoid the crowd, the best time to visit the Kinkakuji would be in the morning when it opens.

Opening Hours: 9am to 5pm 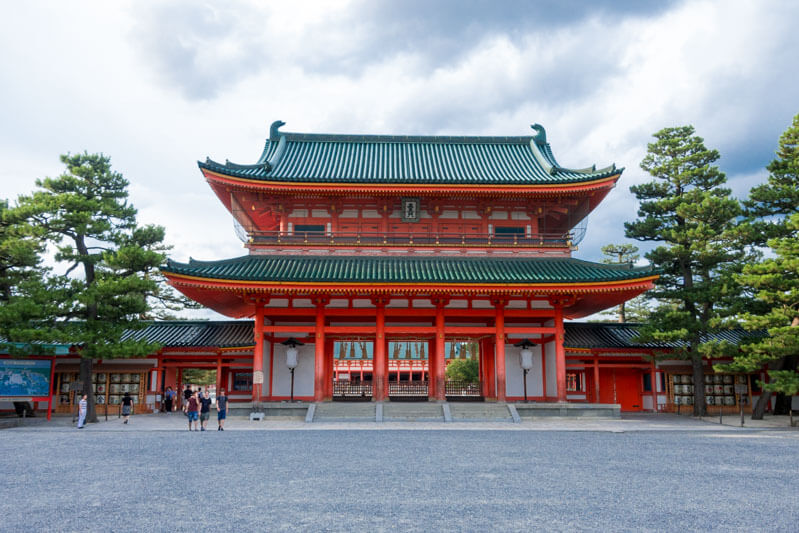 During the Heian period, the Heian Shrine (平安神宮) was built on the 1100th anniversary of the transfer of capital from Nara to Kyoto in 1895. Today, it enshrines Emperors Kanmu and Komei, the first and last emperor who ruled Kyoto. Every year, on 22 October, the Heian Shrine celebrates one of Kyoto’s most important festivals (read our guide to some of Japan’s most popular festivals here), the Jidai Matsuri, where you get the chance to witness the grand procession of mikoshi (portable shrine) roaming from the Kyoto Imperial Palace towards the shrine.

For 600 yen, you get to enter the gorgeous Heian Shrine Garden located behind the main hall, where you get to relish the sight of cherry blossom trees blooming during Spring in mid-April. Nishiki Market is one of Kyoto’s most popular and bustling traditional food markets, selling an eclectic selection of Kyoto-based produce and offering scrumptious cuisine — think freshly-caught seafood, Kyoto sweets, and, if you are lucky, whale meat.

One would never expect to find a shrine located among the numerous storefronts and souvenir shops, but as odd as that is, the Nishiki Tenmagu Shrine (錦天満宮) resides here.

While the city shrine itself is considerably small, it would be impossible to miss it, especially since its front is adorned with rows of large Japanese lanterns that are illuminated in the evening. Housing the God of Scholarship, Tenjin, the Nishiki Tenmangu Shrine sees huge foot traffic, mainly from students who flock here seeking a prayer to prosper in their studies.

The cosy shrine boasts a natural spring, where natural spring water emerges from beneath the ground. The water has been certified safe for consumption and you could bottle some home too.

Famous for its annual celebration of the Gion Matsuri in Summer, the shrine is extremely popular amongst tourists and locals who want to pray for success, love, marriage, or to relish in the lively yet serene ambience.

It is dedicated to the Japanese great God of Prosperity and Health, Susa-no-o.

You can purchase a good luck charm at the miniature shrine booth and hang it up to receive some form of divine blessing.

Every evening, the lanterns, which bear the names of Kyoto businesses who have donated to the shrine, will be illuminated. Couple that with the setting sun, and it’s quite the spectacle to take in.

Live Out Your Studio Ghibli Fantasy in This Japanese Forest Campsite